I'm sorry about last week, folks. It was a bad week. I had intended to post something Thursday, but I got mad at my doctor (I HATE corporate physician offices. I didn't know the office was part of a corporation before I went, though). I had a question after the doctor left me, and they wouldn't let me ask her. They didn't even offer to take my name down and have her call me) so I spent most of the day in a state of seething. Yesterday I had fun, though. I went to a Medieval Faire in Gainesville. If you ever get a chance to see the acrobatic act Barely Balanced, do it. They are phenomenal. Or, buy one of their DVDs. The cool thing is they're not as those big time troupes. They're "one of us". They're funny and personable, in addition to being very disciplined and talented.

I love Scandinavian music of all kinds: The Swedish, The Norwegian, and since the Icelanders originally came from that area, we'll lump them in with the Scandinavians. But an Ex-Scandinavian? Why would anyone want to be ex-Norwegian? Norway rocks! (Sweden, I love you too...)

But wait...what is this their Myspace says? They're from...Miami? Is that a little known town in Norway? I know there's a town in my state called Miami. But surely an outfit calling itself "Ex-Norwegian" wouldn't be setting up its operation in the home of Miami Vice and Making Mr. Right? (Okay, I really loved Making Mr. Right). Why on earth would a group of people from the cold north come to the heat-stroke center of America?

Oh. Maybe it's cause they're not actually Scandinavian. Maybe they're actually from Miami and just got the name from a Monty Python sketch. D'oh! Well, that's alright. Monty Python is awesome, and you know what? This band's music is as hopping as any of my favorite Scandinavian musicians: I could see Jens Lekman recording a slower, more reflective version of this song, but in his version something tragic would happen. Someone would lose an appendage or get kidnapped by a nefarious cab driver. The more I listen to this song, though, the more I hear British influences: The Kinks pop to mind--I'm reminded particularly of the brilliant, but un-complicated "You Really Got Me". Ex-Norwegian weaves several British invasion influences from the 60's: The Turtles (they did the song "Happy Together", coincidentally featured in the movie Making Mr. Right), The Beatles' poppier moments, and maybe a little of The Moody Blues, without the psychedelia ("Tuesday Afternoon", for example). It's one of those songs that'll be timeless. If you hear it in 20 years, it'll sound as fresh as it does today, much like those songs from 40 years ago.

Even their cover art is timeless. (Photo by Flavia Molinar)


The Old Ceremony, "Til My Voice Is Gone"

I love the orchestral start-up of this song, and the way it morphs into a very Arcade Fire-like co-mingling of instruments. What stands out the most, though, is the singer. He strongly asserts each note, in a straight-forward, but emphatic style. Each word is clear--no fussy, ornamental vocal stylings (which in a world with American Idol, this is a welcome change). The no-fuss attitude of his singing supports his message. He sings about hard times coming "one after another", "wave after wave". He won't give in, though: he won't "ask for help or run away " from the problem. His mantra is he "will sing [his] tune until [his] voice is gone". It's a song about standing your ground, knowing you're doing the right thing, and being proud of yourself, despite how other people try to run you down. Words to live by, most days...

"Dude...I told you. Despite our suits and our hair styles, we are not the Beatles. But that would be kind of cool to be The Beatles..."

An Anathallo song is more of a project than a "song". An Anathallo song sounds built--constructed out of gymnastic vocal jumps, latched to the other vocal pieces at oddly synched angles. The groundwork is constructed of a series of staccato guitar and bass rails, with some brass for, well, brass. They mostly stabilize the high-wire vocals that often reach into the falsetto, but occassionally they assert their own piece of the structure. Deconstructing this complex puzzle would bring the whole thing tumbling down. An Anathallo "song" is a piece of architecture: not just a piece of music, but a three dimensional experience.

Anathallo stage an intervention for the camera. The band is worried about the camera's drinking. In retaliation, Camera refuses to light their pictures properly.
Posted by Unknown at 11:36 AM

Thank you :) I'm never sure if people are still listening. It's nice to know people are :) 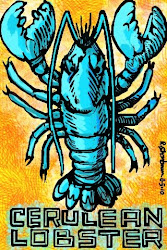 Artwork By Robert Shonbrun
If you would like to add these posts to a reader, this is the feed. I had a podcast for 4 years, but I ended it. I know--I cried, too. I'm going to start another one to go with my second blog, Cerulean's Love of Pop Culture.
End poverty
One
Oxfam America